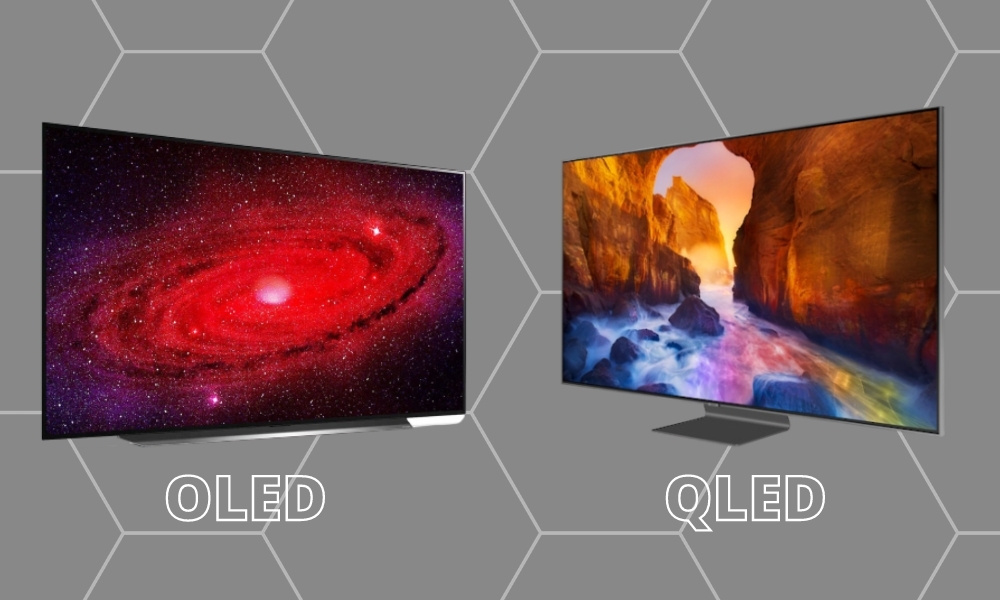 Home entertainment and TVs have seen a big advancement in technology in the past decades.

The newer TVs coming nowadays can give you the cinema-hall like feeling at your home.

The most important aspect of a TV is its picture quality which depends on the display panel used in it or the actual technology used to produce visuals.

Till now you have heard of LCD and LED, and now we have OLED and QLED.

In this post, I have pointed out the difference between Oled and Qled TV

Before that you have to understand the existing LED TVs better, if you think you already know the LED technology better, you can skip that section.

The normal existing TVs all are LED TVs.

These TVs have an LCD panel at the front and LED backlighting at the back.

The LCD panel has millions of pixels placed on it which produces some color when light strikes through it.

This light is produced from the LED backlight.

There are only two types of LED LCD TVs available. One with an IPS panel and the other with a VA panel

Introduced by Samsung in 2017 in their QLed TVs

It is also the same LED LCD TV as discussed earlier with only two options – IPS & VA panel.

But in reality, it’s just a LED TV with additional Quantum Dot Filter

These dots are placed in a film which is sandwiched inside the TV.

The light from the LED backlight hits this quantum dot film which eventually passes from some other layers to finally pass the LCD panel to create the picture.

QLed TV is just a variation of LED TV, all companies put some variation and enhancement to their LED TVs but they do not name their product differently.

Here Samsung has named it differently(QLED) for marketing.

3) Does not suffer from screen burn-in issues.

4) Are power-efficient and consume less power

Now comes OLED TV that actually has major benefits from a LED or QLED TV.

Unlike any other TV – LED or QLED, it does not have a LED backlighting in it to produce light.

The individual pixels on its screen can itself create their own light when electricity is passed through it.

This makes it more difficult to manufacture and costly.

The contrast ratio is the best in OLED TVs due to the fact that each pixel on the screen can produce its own light and can even shut off to produce no light making that area 100% black which is not possible with other TVs.

The dark scenes appears amazing in it as shown above

1) Have the highest contrast ratio to offer. Each pixel can go 100% dark. The blacks are perfectly black in a picture

3) Great Viewing Angles. See the screen from any angle even from the farthest corner and the picture would still appear clear without any color inversion.

4) Very Slim & Thin due to the fact that no film is used for producing backlighting in it.

5) Negligible Motion Blur – motion blur is created when a moving object in a scene moves very fast, in OLED motion blur is not created as the individual pixels can change the color instantly.

3) Can suffer from screen burn-in if not taken care of. It occurs when the individual LEDs die out when a static image is continuously displayed on high brightness. Screen burn-in is permanent damage which can only be solved by replacing the screen(costly).

Which one for Gaming

TV is not meant for gaming. A monitor is.

Although you can do console gaming on TV.

OLED TV will feel better for gaming as it produces greater picture quality with low response times but it suffers from image retention and screen burn-in when a portion of a picture remains static for a longer time.

MicroLED is an upcoming technology of TV that has the advantage of both OLED and LED TVs without their disadvantage.

Like OLED it will have a high contrast ratio and great viewing angles combined with a high peak brightness of LED TVs.

It will also not suffer from the burn-in issue of OLED.

If you are thinking as to which one to buy.

So buy a normal TV and choose upon screen size and resolution.