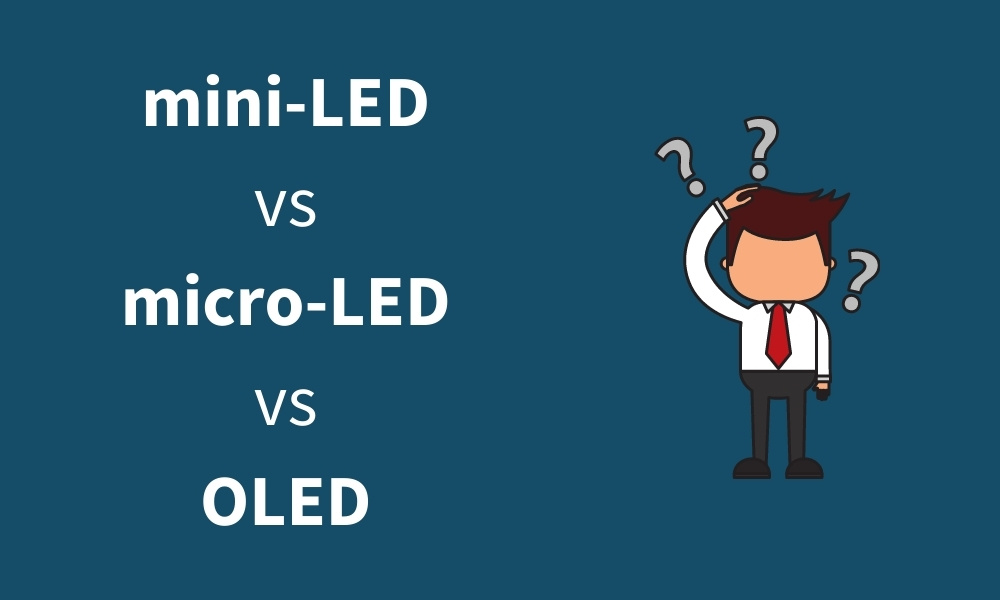 We, general consumers, are habituated with the normal LED TVs which are characterized by a flat panel, decent picture quality, and low pricing depending on the screen size.

But have you heard about emerging display technologies?

By the end of 2020 on December 29, LG announced to launch its first QNED Mini-LED TV.

And before that Samsung announced to launch a 110 inch micro-LED TV.

Along with them, other vendors will also launch their product at the CES 2021 virtual event.

Time is passing fast and with it new technologies are emerging every year.

In this post, we will try to understand min-LED, micro-LED, and OLED technologies better.

Before that, you should have a clear understanding of the normal LED TV.

You can also skip the LED TV section. Refer to the below page index for navigation across the entire article.

What is LED TV

LCD panel’s job is to partially or completely block light for each pixel.

There is a word among people that LCD and LED TV are two different things.

Both words are used interchangeably,

Before the use of LED backlighting, CCFL lighting was used instead which was not very good in terms of picture quality and power consumption.

How does LED display work?

To produce a picture or a visual that can be viewed by your eyes.

The display has an LED panel at the back which acts as a light source. It has a number of tiny LEDs placed on it.

An LCD panel contains liquid crystals that can block light coming from behind partially or completely for each pixel or zone.

This light then passes by a color filter. This filter contains red, green, and blue filters for each pixel.

For every pixel on the display, this filter can produce millions of colors just by combining red, green, and blue filters in varying degrees.

With this, an image is produced on the TV.

Variation of LED bulbs placement on the LED panel

The LED panel can also come in different variations which are direct-LED, edge-LED, and full-array

Direct-LED is the oldest type of LED arrangement on the LED panel. In this, the entire panel is covered with LED bulbs

The major drawback of direct-LED is that it does not use local dimming which is very much required for LED TVs nowadays.

After which edge-LED became popular. In these, the LED bulbs are placed at the edge of the screen or panel.

But it was not very good for a big TV screen and suffered from backlight bleeding.

This is similar to the direct-LED arrangement but in this, a higher number of LEDs are used along with the application of Local dimming.

How is Mini-LED display different from normal LED display?

After understanding the working of a normal LED TV along with the different variations in LED placements.

Let’s look at the mini-LED display.

Consider mini-LED to be the same as an LED display but with very small LED diodes and a higher number of LEDs used.

The LED diodes used in it are less than 0.2mm in size.

With a higher number of LED diodes used, mini-LED takes local dimming to the next level.

What is the Blooming effect?

In Full-Array LED display with local dimming, the light that illuminates a small object can bleed into the surrounding dimmed zones

With mini-LED, the degree of blooming is very low.

Advantages of mini-LED over LED TV

Due to a higher number of zones used in local dimming, the contrast ratio is higher in the case of mini-LED.

During a dark scene, the darker portions of the display can appear grayish in normal LED but this is diminished here.

Disadvantages of mini-LED over LED TV

This is a new technology and so the cost of production will be higher but we can expect its price to fall within a few years.

2. Picture Quality good but not the best

There is no doubt that picture quality is very good in mini-LED but it is not as good as an OLED display.

We may soon see miniLED display in Ipad and MacBook

There is news that hints towards Apple’s adoption of miniLED display in its IPad and MacBook products by the end of 2021.

According to this news, Ming Ching Kuo(Apple Analyst) has said that at least 6 Ipad and MacBook products with mini LED displays are under development for launch by the end of 2021.

mini-LED is a better contender for smaller devices like phone, tablets, laptops, etc and so there is good news for Apple users as they now have the option to opt for their favourite Apple product with better picture quality

What is OLED display

Welcome to the self-illuminating category of displays.

OLED displays are the biggest innovation in the TV industry.

“This display does not require any LED panel for backlight. It can produce its own light from the panel itself”

Its pixels can self-illuminate themselves. Due to this nature, each pixel can go completely black and completely white taking the contrast ratio very high(almost infinite).

The blacks produced are perfect and deep.

All this makes OLED a display with the best picture quality.

The key to this display is the use of an organic element that can produce light when electricity is passed through it.

There is zero light bleed, no blooming or halo effect.

Though a long time has passed since OLED’s discovery but it started to appear on the market only a few years back.

OLED TV comes in the premium category of TVs. These are very expensive.

Along with the self-illuminating pixels, it has certain drawbacks also.

Due to the use of organic compounds which decays and degrades with time, OLED TVs have low life and can suffer from image retention or screen burning.

OLED is better than the traditional LED TV(including mini-LED)

OLED is better than LED TVs as it does not require an LED panel for backlighting.

Each pixel on it can produce its own light and so can produce a perfect color with perfect light intensity.

While the most advanced LED displays like mini-LED cannot produce 100% accurate color with 100% correct intensity for each pixel.

In darker scenes, dark portions can appear grayish in the case of LED while it will be perfect black in an OLED TV.

But still not close.

Advantage of OLED over LED

Due to the self-illuminating nature of OLED, the blacks produced are completely black making the contrast ratio very high.

The portion of the display which should be black is 100% black in a scene.

Viewing angles refer to the extent to which one can view the screen such that there is no significant inversion or degradation of colors.

It is very high in the OLED display. Even at the extreme corners, the picture quality remains unchanged.

OLED TVs are very thin. This is possible as no LED panel is used at the back for acting as a light source.

Disadvantage of OLED from LED

Due to the use of an organic substance in an OLED display which suffers from decay and degradation with time.

This is the biggest disadvantage of an OLED display.

It occurs when a portion of the screen constantly displays the same image.

And if the brightness level is high then there is a high chance of screen burning.

In screen burning, the display shows the same image in that portion always no matter what channel you change.

OLED comes in the premium category of TVs and so are very expensive.

Should You buy an OLED TV

If you have the budget to get an OLED TV then go ahead and buy it to get the cinema like feeling at home.

Currently, this is the only option that offers the best picture quality with deep inky blacks.

However, you should also consider that its life is low and can suffer from screen burning.

You can also wait for the upcoming micro-LED display which is an upgrade to the OLED TV and does not suffer from screen burning.

What is MicroLED Display

“Micro-LED display is an upgrade to the OLED display”

It has all the good things of an OLED display which is inky deep blacks and high contrast ratio but does not have its disadvantages like screen burning and low life.

Unlike OLED which used organic compound, micro-LED uses gallium nitride which does not suffer from decay like OLED

How is micro-LED better than OLED?

Unlike OLED which has a shorter life span, micro-LEDs have a longer life span and can last 8-10 years.

It can not suffer from screen burning as no organic substance is used in the panel.

MicroLED is better than OLED in every way.

But It is years away from replacing the OLED display.

As of now, a micro-LED display is very difficult to manufacture and so very expensive even when compared to an OLED display.

In the coming future, we may see the production cost of micro-LEDs going down.

According to Omdia, It is expected that there will be around 16 million shipments of microLED displays by 2027.

As of now, it is only a luxury for general consumers.

Both Micro-LED and OLED belong to the same category of panel which is self-illuminating in nature.

While Mini-LED is just an upgrade of the LED display.

Mini-LED offers a very good contrast ratio, deep blacks but these characteristics are still not as good as in microLED or OLED.

OLED and specially micro-LED is very difficult to manufacture and very expensive.

Mini LED is easy to produce when compared to OLED or microLED especially in smaller devices like phones, tablets, or laptops.

Placing tiny LEDs on the display itself of a small device like a smartphone is very difficult.

As of now, it makes sense to use mini-LED technology on phones and laptops.