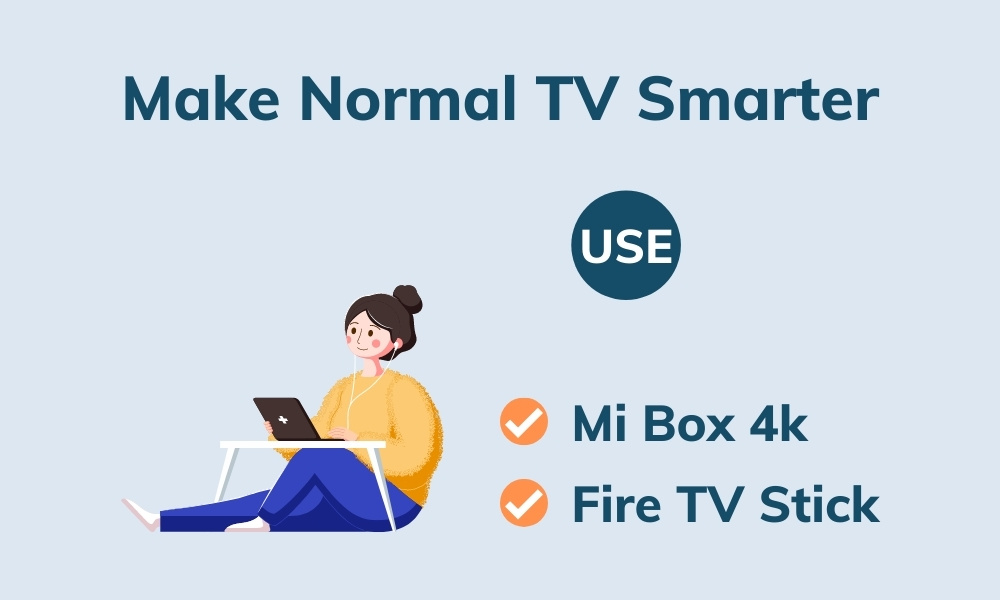 Gone are the days when people used cable connections to watch Television shows.

Now are the days of netflix, prime, youtube, hotstar, etc

But to watch this OTT content your old normal TV will not suffice.

You need a smart TV with smart TV features. Price of a smart TV starts from 10,000 and goes as high as 1 lakh.

Does that mean we cannot enjoy TV entertainment without going for a new TV and spending 10,000-30,000 rupees.

No, it is not the case

You can enjoy netflix, hotstar even on your old TV.

You just need a streaming device that can convert your TV into a smart TV.

And these streaming devices are cheaper than smart TVs and comes in the range of 3,000-6,000

You can make any TV a smart TV using these devices.

These devices can be categorized into – Streaming Stick and Streaming Box.

There is no big difference between both. Both are used for the same purpose.

Back then it was the only option to convert led TV to a smart TV.

The Fire TV stick package contains one stick used for streaming and one remote for controlling it.

It uses Fire OS which is similar to Android OS. The main feature of this OS is its interface that is easy to use and lag-free.

This is the best smart TV stick till date.

It comes in two variants – FHD and 4K respectively.

Otherwise, the normal variant is fine

To use this device you need to put the stick into the HDMI port and power it with the adapter that comes with it.

To control the stick you need to use the remote included in the package.

It supports Alexa Voice using which you can voice control the TV.

Ask your locality weather, play music by its name, or play an app like youtube just by voice command.

It comes with support for HDR, HDR 10+, HLG format.

You can mirror your phone to the TV using this streaming stick. This feature can only be used with android phones.

The next contender that comes near to the Fire TV stick is the MI box 4K streaming device.

Unlike the previous device, this has Android 9.0 OS in it and the device is a box, not a stick.

During first time setup, you need to connect it to your google account.

Being an Android OS you get access to google assistant and playstore.

You can voice control the TV just speak out the commands.

Tons of applications to download with and is available on google playstore.

The best feature of this streaming box is that you can connect a USB pendrive, home theatre, external wired speakers using the ports provided on the box.

To control the device you get a remote within the same package. There are dedicated buttons for netflix and prime video on it.

Using the built-in Chromecast feature mirror your phone screen to the TV screen. Watch pictures and play games directly from the phone.

It supports basic HDR format but does not have Dolby Vision.

If you have an old TV or your smart TV is not getting any software update.

Then to enjoy OTT content like netflix you can use this smart TV box from MarQ which is under Flipkart.

However, one biggest con of it is it does not support Amazon Prime.

It is similar to our MI streaming box and can make your dumb TV smart.

It runs on Android 9.0, supports playstore, google assistant, Chromecast and other features that comes by default with Android OS.

This Turbostream device has a quad-core ARM processor with Mali 450 GPU, 1GB RAM, 8GB of Storage.

You can connect your wireless headphones or speakers using Bluetooth 4.0 support in it.

Being a Flipkart product It is only available on Flipkart and you can buy it from there.

The remote has dedicated buttons for youtube and netflix.

To use the remote you need to point the remote in the direction of the streaming box, pointing it in a different direction will not work, this is a major con.

It can run both HD and Full HD content on a TV.

A mic is inside the remote using which you can voice control the device.

A new contender in the streaming device space is the Media Streamer from Nokia.

You may have seen phones from Nokia but now they have started making LED TVs and other stuff like this media streaming device.

The remote has dedicated buttons for Netflix, google assistant and Zee5.

Similar to other android box that make normal TVs smart, it also has Android 9.0 in it.

With access to google playstore, you get tons of applications to download with and using google assistant you can voice control the TV.

It can run both HD Ready and Full HD video content.

Powered by a quad-core processor and Mali 450 GPU with 1GB RAM and 8GB storage.

Setting this device is pretty easy like any other device. Connect the box to the TV’s HDMI port using HDMI cable. To give power to the box connect it to the adapter given in the package.

From here the device will start setting up.

Here we have Airtel XStream Box which is very different from other streaming devices in the market.

It is a hybrid of DTH and smart TV box that means you can run DTH channels as well as stream Netflix using the internet.

It can run both Full HD and 4K content.

Powered by a 1.8GHz dual-core processor with 2GB of RAM and 8GB of storage.

Dedicated buttons for Netflix, Youtube, Prime, Google assistant can be found on the remote.