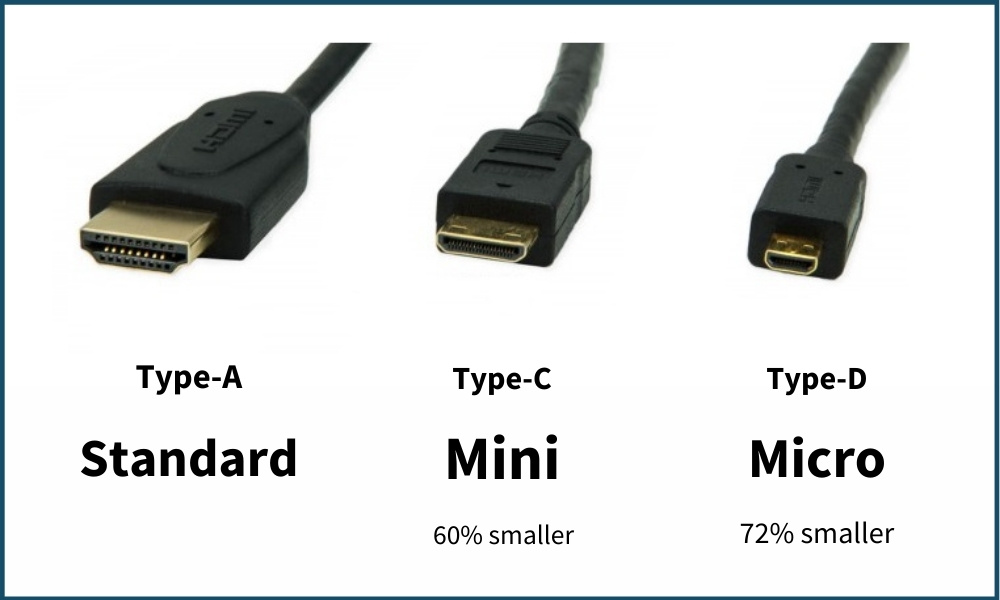 What is the difference between mini HDMI and micro HDMI

A decade ago when HD or lower resolution was the standard of video content we had different types of cables for connecting various devices together like RCA cable, AVI cable, DVI cable, etc

These ‘N’ number of different cables was much of a hassle

To reduce this hassle and save us from these complexities HDMI cable started to become the standard for connecting devices for audio/video transfer.

HDMI cables are the most used cable in homes. It is used for connecting devices like TV, Blu-ray player, Xbox, home theatre, etc

We even see these cables for laptops, PCs, projectors.

It is the standard for transmitting audio/video signals.

The cable consists of connectors on both ends which may look similar to USB.

Bidirectional signals – IN HDMI, signals can travel in both directions.

Read More | Use of HDMI in TV

HDMI cables can be categorized into 3 types based on the sizing of the connectors.

All the 3 cables have the same 19 pin configuration.

At the time of buying, you may find this cable in the package.

Earlier it started to be found on some tablets but became rare.

It became popular to use with cameras, camcorders, DSLR cameras.

Manufacturers didn’t change the Type-A HDMI with the mini HDMI in TVs, projectors, PCs as these have plenty of space.

It has the same 19 pin configuration and these pins are placed in a tiny compartment to save space.

The standard Type-A HDMI port will take 1/3rd area of your smartphone. For that reason, micro HDMI was developed

In the early days when USB Type-C was not prevalent, micro HDMI started to be used with some smartphones like the Motorola Droid X

Micro HDMI being a new technology, Motorola used this as its top advertising features

But with time as USB Type-C became more popular and the standard for phones, micro HDMI was ditched by everyone.

For phones, HDMI cable will generally be used for displaying the phone display on the TV screen.

With the advent of smart TVs, this can be achieved by using google Chromecast or miracast.

So there is no need for an HDMI cable for phones.

How to Differentiate HDMI

You will find standard HDMI ports in most of your home gadgets with mini and micro being rare.

Still if you are confused with the HDMI cable you will need for your laptop, PC, TV, projector, etc

It is very easy to differentiate these

There will be curves on both side like in the picture above in case of standard type-A HDMI ports. While in case of Mini HDMI ports the bottom sides will make straight line.

Micro HDMI will look like your phone charger port.

With any HDMI cable in the market, you get support for 4k video. You will have to look for HDMI 2.1 incase you need to transmit 8K video.

If you need to connect two devices with different sized HDMI ports.

Check this on amazon.