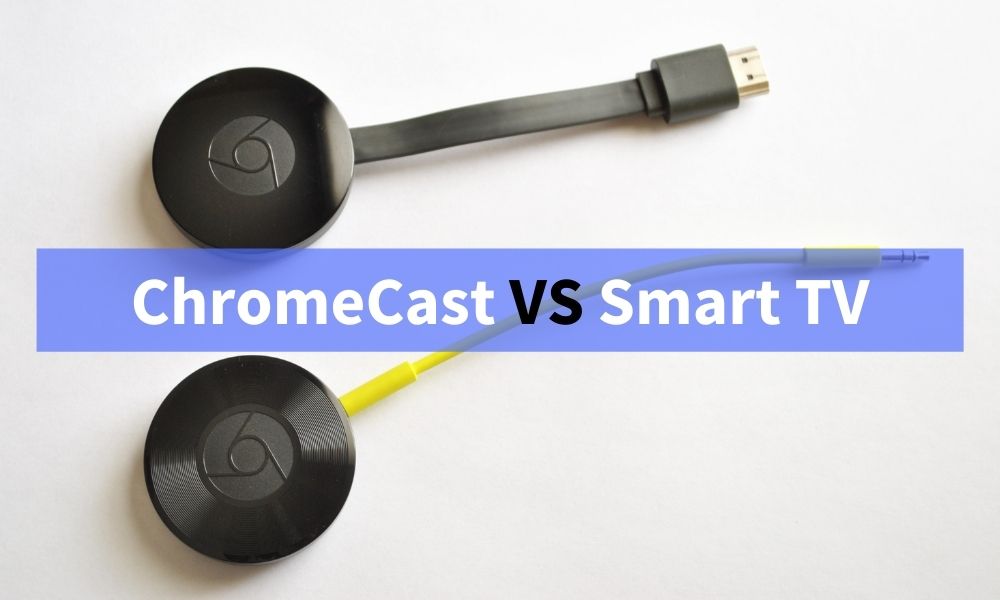 Back in time when we had normal dumb TVs and OTT content like Netlfix was still on the rise.

If we wanted to watch Netflix on our normal TV it was impossible.

Then in 2013 Google launched its product – google Chromecast which allowed us to watch Netflix or Youtube on our TV.

In this post, I have covered about the Google Chromecast dongle, smart TVs, and the new Chromecast which comes with Google TV.

Refer to the table of contents below for navigation.

What is Google Chromecast

In 2013, google launched google Chromecast when the use of normal TVs was prevalent.

This tiny looking dongle was used to wirelessly cast a smartphone app’s content to the TV.

For example, you can play a youtube video from your smartphone to the TV screen with this device.

The video gets downloaded by the Chromecast device which is then played on the TV screen.

The only features this device is capable of is to screencast an app’s content on the TV or use your phone or laptop to screen mirror with the TV.

Both are two different things.

In screen mirroring, your smartphone screen gets exactly mirrored with the TV screen or to say displayed on the TV.

Whatever you do, open the gallery, play a game, everything is exactly displayed on the TV screen.

While with screencast you cast a particular video from an app to the TV. This means only that video is played on the TV and nothing else.

How was Chromecast useful?

Chromecast allowed both screencast and screen mirroring with the TV.

“Your Phone worked as a remote with Chromecast”

Watch OTT content – If a user wanted to watch YouTube, Netflix on his dumb TV then he can cast it from his phone to the TV.

View images – Images can be viewed on a large TV screen.

How is Chromecast different from a smart TV

As time passed vendors started to push smart TV in the market.

Now smart TVs are cheaper than ever and available in big screen sizes.

All the OTT content – Netflix, Youtube, etc are now directly available as an app on the TV.

With this you no longer need google Chromecast for viewing OTT content using a phone.

Smart TVs can be of two types – Android and Smart.

Both vary in the interface and the availability of apps. But it is sure that both will have popular apps like Netflix, YouTube, etc

Earlier Smart TVs may or may not had features for screen mirroring or screencast.

But now almost all smart TVs have a screen mirroring option.

Check this realme TV on which built-in chromecast is written on the product specifications.

There is no point in using Google Chromecast now

With smart TVs becoming popular and the growing demand for consuming OTT content.

Streaming devices came to the market to fulfill the demand of customers who did not wanted or had the budget to shift to a smart TV.

These were cheaper than the entire smart TV and made the old dumb TVs smarter.

Now users had the option to use their old TV for consuming OTT content without buying a smart TV.

As of now, there are tons of streaming devices for use.

Some popular ones are

These streaming devices kill the need of using a device like a google Chromecast and they are similar in pricing.

Then what should you Use

If you have a smart TV or even a normal dumb TV.

You can use a streaming device like a Fire TV stick or Roku stick.

You may say that If I have a smart TV why will I need a streaming device?

Well with time your smart TV will become obsolete.

The OS and the apps will stop getting updates and so you will be stuck and have two options – buy a new smart TV or use a streaming device.

A streaming device has its own OS, processor, RAM, and storage.

It gets timely updates and costs cheaper than the entire TV.

Also in terms of usability, it can be faster than most of the smart TVs.

But wait we have a new Google Chromecast device.

Google has now launched its new Chromecast device in 2020 which has Google TV in it.

This device resembles the older dongle but now comes with remote control.

How does this compare to a smart TV?

The new Google Chromecast compares to a smart TV similarly as a streaming device compares to it.

It is not wrong to say the newer google Chromecast is a streaming device.

The device can stream up to 4k resolution with HDR10+, Dolby Vision formats support. It also supports Dolby Audio, Dolby Digital Plus, and Dolby Atmos.

This new device supports all the older Chromecast features plus new features like Google TV and a remote.

Google says that the new Google TV will replace the Android TV to offer a smoother user experience.

It has a feature called ‘For You’ that suggests shows and content based on a user’s viewing preferences.

Another feature includes ‘Apps Only’ mode, this removes all the content recommendation if you prefer a simpler interface.

In the future this device will support Stadia which is Google’s cloud game streaming service, allowing users to play high-end games with the Chromecast.

Other features include Google Assistant and Google Home